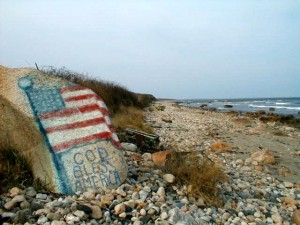 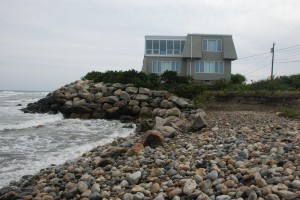 An offshore storm, which had been lingering off the Cape for several days, had decided to nudge in a little closer to the RI coast when I decided to head out for a coastal walk. The formerly blue sky faded as shredded clouds flew overhead from the northeast and frantic waves rolled over each other in a race to the beach. A handful of brave and competent para-surfers were tearing up the shore, adding a colorful touch to the many flags flapping at attention along the boardwalk.

I was at the pavilion on Scarborough Beach, contemplating the day’s outing with a little trepidation. My goal was to make my way to the light house at Point Judith (2.28 miles one way), along what I knew was a highly built up section of shore. I could almost hear that stereotypical old Mainer advising me that, “Ya can’t get theah from heah!”

Don’t believe everything you imagine you hear. You can, and I did, have a great afternoon making the trip. You will need a pair of shoes for the outing, as this shore is a combination of loose cobble stones, some sand, and some boulders to climb over. It is certainly within the abilities of all able bodied trekkers of any age.

When you get to the water, turn right (south) and get going. The sandy beach gives way to a cobbled rocky shore when you get to the sewerage treatment plant just past the state property. The shore juts out slightly in what may be part of the underground pipe infrastructure. You would not know you were near any such establishment from the water line. There is no view of the plant, and the discharge pipes pass at least hundreds of yards offshore before releasing their effluent. On almost all days, with our prevailing winds out of the southwest, you would have no olfactory hint of its presence either.

But this was a storm situation, with the wind from the northeast and off the water at this location. I did get a trace of the septic presence along one short stretch because the wind carried the odor back to the shore from the exit pipe. Usually the wind takes the gases out to sea, mixes them into the general atmosphere, and any settled lands in that direction (the Cape and Islands) never become aware of it. It’s called the “dilution solution.”

The first section is a picturesque quarter of a mile of stony beach with a scarp, or erosional bluff, on the landward side that gives the walker a private stretch of passage. Eventually you get to the beginning of the developed part of the walk. In fact, much of this outing is made up of a series of pocket beaches where one can fish, swim, or walk; and house lots heavily armored with stone or cement walls with which the shore walker has to struggle. Our citizens’ right to pass along the shore (among other privileged shore activities) encounters some tricky currents in this situation.

The problem comes when property owners “armor” their shorefront edge. They build a structure to try to prevent their land from disappearing…literally. Whether it is a cement wall, or a piled rock revetment, it temporarily prevents the bluff from crumbling into the ocean and being carried out to the nearshore seabed (temporarily may be five years or fifty, and maintenance is required).

Without these structures the shore would have already receded landward and would have remained in its natural form, which would accommodate the citizens’ constitutionally guaranteed shore privileges without any problems. From the general citizens’ perspective, that would be a good thing. From the shorefront homeowners’ view it would be a tragedy. Their house lots would have ceased to exist. The waterline would have been shifted on the town maps and the lot numbers erased from the land records.

These are fabulous places to live, and I am truly empathetic to their tough situation. They are stuck between an ocean and a dry place with nowhere to go and no way to stop the process of landward migration of the water’s edge, which has been going on for the last ten thousand years.

As development continues to accelerate along the water’s edge, and more fences, signs, and other attempts to prevent the public from exercising their legitimate shore rights are created, the citizens of Rhode Island are waking up to the encroachment on their heritage. There is a conflict in need of a resolution brewing here in little Rhody.

Two questions can be framed to generate some thought about the issues involved:

1. How are shorefront property owners going to accommodate the citizens’ right to pass along the shore across their property, as in their right?

2. What are the other million RI citizens willing to do, in the spirit of neighborliness, empathy, or civic mindedness, to accommodate the “ground truth” of already completed development without giving up their right to use the shore?

Somewhere, somehow there is an answer to these questions among reasonable people. (Three states, Hawaii, Oregon, and Texas have answered them already and have “open beaches” laws. RI actually had a preliminary version of such a law brought to the floor a few years ago!)

But on this day, I was interested in getting to the lighthouse! When I got to the first wall, I stepped up onto the edge of the property and saw that there was a quiet road running parallel to the water’s edge and that the house lots weren’t very deep. In this location, walking down the road was still pretty much a shore stroll, so I made that my pathway. I know I could have ambled along the water edge of the walls through the yards, but here I was willing to pass along the road until there was a chance to drop back down to the beach.

And that is how this walk went. I sashayed down one of the lanes looking out at the water between the houses, and when each section of roadway ended at an undeveloped area, I made my way along the edge of the last house lot to the water and continued my travels at the water’s edge. Now, it is true that our rights do not include crossing private property to get to the shore…we have to have a public access point to first reach the water before we move along the coast. It was a judgment call on my part. I thought, “Would this homeowner rather grant me trespass along the far end of their property, or would they rather watch me cross in front of their picture window along the top of the retaining wall at the water’s edge?” I think they appreciated my choice.

When I came to the next armored section, I clambered up onto the accompanying road and continued on my way until it hit a vegetative terminus, then went back down to the beach, etc.

There are three natural stretches of shore between Scarborough State Beach and Rose Nulman Park at the lighthouse. They are different lengths, but all are lovely coastal jewels. I happened to be making my trip shortly after two near misses by hurricanes at the tail end of summer, and the beaches were built of rounded and scrubbed brick sized, flattened cobbles and a little sand. I think that at other times these areas may well have appreciable sand accumulation, which would enhance the swimming and sunbathing aspects.

One interesting sight along this shoreline is probably a glimpse of the future. It is found at the northern end of one of the undeveloped sections. When you come to the beach from the neighboring lot, you have to walk along one of the stone retaining walls that have failed. The wall, maybe eight feet high, is actually separated from the rocky beach. The waves of the advancing sea have pulled the sand out from behind the boulders, and the wall now stands as a marker of the edge of someone’s house lot from another time, standing in the water advertising its impotence.

Another point of interest is a very incongruous cement wall, at a forty –five degree angle going back from the beach near the sewerage plant and up on the bluff. I don’t know its origin, but it is covered with colorful graffiti, maybe one could say graffiti art…at least it is a colorful and not vulgar eyeful.

There is another interesting thing you will not get to see. Several years ago, on this shore I photographed a boulder which had a really cool American flag painted on it and the phrase, “God Bless America.” I was looking forward to including it on my description of the walk, but the place where it once rested, on the edge of a sandy piece of shore, is now a six foot bluff beaten back by the surf, and the boulder is no where to be seen.

Something to take away from this walk is that when you see a wall, or the houses of a development, at the end of the stretch of shoreline you are walking down, that does not mean there aren’t some wonderful places to enjoy your Rhode Island coast just beyond them. Go for it!

This column is the opinion of the author. Jim Bedell is a geologist and teacher of Marine Environmental Science, biology and physics who believes that the constitutional rights of Rhode Islanders to explore the state’s shore are being threatened. He welcomes comments or questions from readers seeking more background on public access rights or any coastal issues. He can be reached by calling 401-499-1405 or e-mailing jimbedell@cox.net.