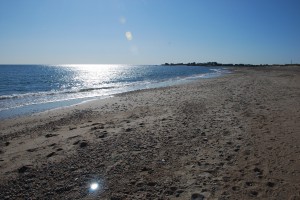 Walk this shore at ANY tide of the day!

In our work to prod forward the effort to regain the full “shore privileges” guaranteed by our Rhode Island Constitution, we have brought up several points which have received support from everyone with whom we have spoken. Namely:

Though supportive, several people from the law, academic, and state agency rosters had a repeating challenge to item number three above. Their well taken point was that, if the state had clearly defined the meaning of “shore” somewhere in the voting process as being only below the high tide line, there would be no further argument.

We were challenged to investigate any and all information made available to the public as part of the referendum process to see if the citizens were, in fact, ever informed that the privileges of the shore existed only below a tide dependent reference point. Metaphorically speaking… we picked up the gauntlet.

We have gone through them all, and:

Below you will find  some quotes of relevant passages from these documents:

From the Justinian Code (The Roman Legal foundation 0f the Public Trust Doctrine) :

From the RI Constitution:

From the Annotated RI Constitution:

From the constitutional committee report:

From the constitutional committee findings:

From the voting booth placard for a yes/no vote: