Like picturesque lighthouses? Appreciate quaint and appropriately aromatic fishing villages? If the answers are “Yes!”, then you are going to enjoy this outing from start to finish.

This walk starts at the famous lighthouse at Point Judith, built in 1816, marking the western entrance to Rhode Island’s Narragansett Bay. It will take you in a graceful arc to the southwest and finish at the commercial fishing port of Galilee. The total distance is 2 miles one way.

Wiggle your way down route 108 to the lighthouse. Next to the Coast Guard property itself, you can pull up into the parking lot of the Rose Nulman Park, a privately supported park for the public, thanks to the Nulman family. To the east you are looking out towards Newport, France, and, off to the left, the opening of the bay. I was pleasantly surprised to find out that the lighthouse grounds are open to the public during the day, and you can walk around the lighthouse and enjoy the well maintained grounds. The only Homeland Security caveat is that visitors “consent to the search of personnel and property under their control.” Fair enough.

Step off the short wall along the south side of the lighthouse property onto the beach and head west (right). The terraced beach of sand, shells, and stones curves away to your destination in the distance. The hill you come to is really an old military bunker, now bulldozed closed and grown over with shore vegetation. The curved, geometric slabs of a gun emplacement are easy to make out, sliding slowly down the beach into the sea. Find the footpath up to the top and enjoy the sweeping view of the Harbor of Refuge and Block Island Sound. As you gaze to the southwest, appreciate what it took in the very early 1900’s to construct the three miles of rock jetties that created the Harbor of Refuge. Originally built to give shelter from sudden storms to coastal shipping in the northeast, it has been maintained also to provide sheltered access to the port of Galilee.

This bunker is state park property, and an alternate parking place from which to begin your day. It is signed as the “Camp Cronin Fishing Access,” and indeed many fisher folks` make use of it. It is also used by others of the shore loving public as it gives entrance to the coast, which makes this walk with all its opportunities possible.

Here also, nestled between the foot of the bunker slope and the start of the breakwater, is the Point Judith Fishermen’s Memorial. It is an under stated blue granite garden space, with the inscribed names of the local fishermen whose last voyages had no homecoming. Looking over the stone blocks, out at the horizon’s arc, the thought came to me that we all owe something more than the menu price when we enjoy our fish and chips on a Friday night.

Many fishermen, as well as the adventurous trekkers, rock hop their way out on the breakwater boulders to experience the view and the waves away from shore. If you are so inclined, give some attention to the size of the ocean swells on your day. When big combers are running in from the East, they break right over the rocks, and a trip to the far end goes from being fun to being foolish.

As you pass the foot of the jetties, you walk past the quiet beach and under the high bluffs belonging to the Breakwater Village Beach community. A coast watcher e-mailed me last season with the experience of being challenged by the homeowners as he tried to walk by their strip of beach, but I encountered only friendly hellos on my walk.

In this situation it is important for the coast walking public to remember that our constitutional right of passage (and to fish, swim, and beach comb) only includes a narrow easement corridor, up to ten feet or so above the high tide line where you see the debris left by the last high tide swash. Beyond that, the public has no right to enter on or otherwise use the private property of the shorefront owners.

Continuing on along sometimes sandy and sometimes stony beachfront, I witnessed four or five ospreys out hunting. One after another would hover in helicopter mode over an unsuspecting prey, then drop like a sleek rock, slam into the water, and if lucky, fly up with an unlucky fish. 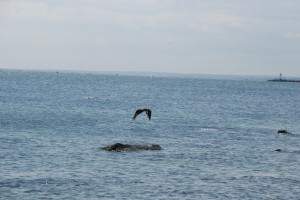 Other coastal artifacts you will see, starting by the bluffs and spaced out all the way around to the state beach, are rock structures sticking out perpendicular to the shoreline. These are called groins, and were built to keep sand from migrating sideways away from a particular stretch of beach. This was a bit of ocean engineering employed in the past, with mixed results. They do cause laterally migrating sand to build up on the “upstream” side, but the beach downstream is deprived of its sediment source and shrinks. Ocean beaches are built and maintained by the energy of the waves, and we humans often suffer the” Law of Unintended Consequences” when we try to change the dynamics of Mother Nature.

“groins” = a bad idea to try to save a beach

Though you are under the protection of the breakwaters with respect to dealing with big surf along this coast, there is a unique surfer window here from time to time. When substantial swells are coming from just the right direction (SE-ish), a section of each will come through the eastern opening in the breakwater, spread out and then rise up as it hits shallow water, and present a well formed and mild mannered wave perfect for beginning surfers!

After a bit of walking you come to the wide sandy landscape of Capt. Roger Wheeler State Beach, where bathrooms, lifeguards, and other facilities are available. Here the wave energy is minimal if not negligible, and the long boulder groins provide underwater seascapes for young snorkelers and the curious wader. The state beach has strictures barring dogs from the beach for understandable sanitation reasons, so that leaves fido out of the entourage for this outing during the summer season.

The sandy beach continues around in front of a long string of houses set back on a dune hill. This stretch leads to the Galilee Breachway and the famous shore dining emporium, George’s of Galilee. Also located right at the breachway is another state beach facility, the Salty Brine State Beach. At this date, that facility is being entirely rebuilt, and construction fences in the area affect where you can and can’t go. You can still get to the breachway rocks, to fish, sun, and enjoy the parade of vessels of all types passing by.

The village and port of Galilee is a great place to explore on its own merit. Quaint as it is, it is also a major commercial fishing port, with 37 million pounds of fish landed annually. Of course be sensitive to signage around the dock area, but a curious walker can still get to see what real fishing boats are like, smell what real bait is like, see cool Coast Guard Surf Rescue Boats, watch the Block Island Ferry come in, and of course, eat fresh seafood at any one the great restaurants to be found there.

This coast walk is a great example, a paradigm if you will, of the value of our constitutionally guaranteed shore privileges here in little Rhody. A great stretch of shore has public access areas with readily available parking at both ends. This highlights the benefits available to the citizenry once we gain access to the shore. Limited as our public easement is along the water’s edge, it opens up mile after mile of recreational opportunities here in the Ocean State.

This column is the opinion of the author. Jim Bedell is a geologist and teacher of Marine Environmental Science, biology and physics who believes that the constitutional rights of Rhode Islanders to explore the state’s shore are being threatened. He welcomes comments or questions from readers seeking more background on public access rights or any coastal issues. He can be reached by calling 401-499-1405 or e-mailing jimbedell@cox.net.