From the beginning this walk had the hallmarks of an adventure. From the parking area on the left side of the road down the middle of Beavertail, about half way down the island, I made my way over a hodge podge of catwalks, planks, and pallets to reach the beach. The parking is obvious from the road and convenient, though there is only room for a few cars. Someone, or some people, have spent a good deal of energy setting up the footfall supports for the walk, which looked like it would be a muddy experience if you were to attempt it right after wet weather. I began at the parking area for Hull Cove and ended at the point of Beavertail right in front of the lighthouse. There is no identifying signage at the parking area, so look for the pressure treated timbers that define it. It is a one-way distance of about 1.3 miles.

When I popped out of the covered pathway I was at the bottom of a sizable cove on the east side of Beavertail Island…a.k.a. Hull Cove. This is a popular fishing, diving, and snorkeling destination for those so inclined. My destination was to the right, or south, to the end of the island. A short stretch of pebbly beach gives way to a bedrock apron along the water’s edge.   This rock is not like the crystalline granite of Narragansett, but rather a grey and flat set of slabs that vary from horizontal to slanting down towards the water. The going was easy and the view terrific.

I passed under the decks of several houses perched high on the level land above the rocks, a few of which had stairs leading down to the water. One of these houses has a very cute set of lily pad like cement steps, with flower impressions, leading down from the yard to the water. I believe the houses are part of Clark’s Village, one of the only real neighborhoods to be found on Beavertail. Just after these houses things got interesting.

Two things determine the topographical personality of any coast. One is the amount of energy that the sea expends on the coast. The other is the way in which the coastal materials yield to that energy. On this stretch of the shore the rocks yield by breaking off in vertical walls…cliffs. Looking down the coast from water level reminded me of a scaled down version of the “Cliffs of Moor” on the west coast of Ireland. It has a pretty dramatic look to it, and must be wild on a day with a heavy sea from the southeast. These cliffs, however, present a challenge to the coastal traveler.

There are places where the rock walls drop directly into the sea, and others where there is a narrow shelf of bedrock at the water line with sheer cliffs behind them. Either case exhibits a dangerous exposure for the pedestrian visitor. The solution to the problem is to move up and inland and pass along the shore using the closest, safe, path possible. Our Rhode Island Constitutional rights give us the leeway to pursue this course. We are given the right “to pass along the shore.” It is a guarantee of the wherewithal to complete the activity of passage from origin to destination of choice. I think any reasonable interpretation would judge that walking a few feet further inland to remove the threat of mortal danger is part of a guaranteed right of passage.

I didn’t have to break new trails to do this, other coast walkers had passed before me, and the path was easy to see in the grass/dirt. But there haven’t been a whole lot of predecessors. The path is “thin” as opposed to wide open and clear, and passage includes pushing through the remaining underbrush, including some patches of bull briars.

The bull briars are one reason why I would hesitate to make this passage with a troop of little people. The scratches and ouches might not be worth the experience (There is another way…which I will point out later). The other reason for caution is that the hardy souls who previously passed this way have, in several spots, walked right on the edge of the cliffs. I mean six inches from a twenty-foot drop to rocks or the water. I love this kind of thing, but I was definitely paying attention when I was moving along that edge! Again the solution is to break trail another ten feet or so inland, which had been done in places, to make the shore walker’s passage a safe one.

Another facet of this part of the walk are the clefts, or indents, where the rocks have yielded by shattering along planes of weakness and leaving sharp, deep punctures in the shore. The path does a good job of getting around these features if the walker uses some care in the process. One of these defiles is of particular interest. 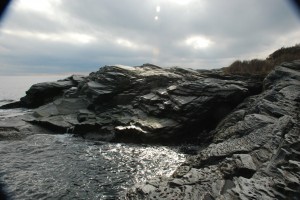 As I was walking along, on a day that was only partly cloudy, I thought I heard thunder. It happened several times. Then while scampering up and around one of these cuts in the coast, I was startled by a rumble and rush of air right at my feet. One of these chasms is a thunder hole! When each wave pushes up and into the crack, it forces the air ahead of it to squeeze forward and out an opening further up the indent. The result is a deep, booming sonic blast. The odd twist is that up close I could clearly hear the rush of the air, but at a distance I couldn’t hear the whoosh, only the rumble; ergo the “thunder.” A note is in order here. The day of my walk had a wind from the southeast, which was sending a small swell from that direction up into the “hole.” Similar wind and sea conditions may be necessary to produce the phenomenon.

The thunder hole marks the approximate half way point in the outing, and also begins the easier part of the walk. From that point to the lighthouse the shore is comprised of wide and easily passable bedrock, most if not all of which is part of the state park property. That makes the thunder hole accessible to the younger among us if you only cover the second half of the passage. An expedition including little people can comfortably accomplish a round trip from the lighthouse parking lots.

At a further location I passed over a geologic contact boundary, where the bedrock changed from a black color to a grey. Each of these colors marks a distinct member of a geologic grouping called the Jamestown Formation. Each has a slightly different history, though they are now smashed, faulted, and folded together and make up the tip of the island. All of these rocks began as ocean sediments off of the coast of Africa, and the different shades of color, seen in parallel stripes, mark the arrival of different types of materials on the sea floor as the west coast of Africa aged.

If you walk along with a careful eye you can see the folds in the rock layers at some places, and at others the faulted offset of a thick, black basalt dike. The dike is an intrusion of deep magma forced up into a crustal crack as our continent broke away from Africa, and was later itself broken and shifted. In these folds and faults you see the evidence of the collision of continents. A missing feature, once easy to find but recently chipped out in a selfish act of “geo-vandalism,” ancient (100’s of millions of years old) trilobite fossils were once visible on the surface. Their particular species identification matches up only with those found in the rocks of Africa; another bit of local evidence for continental drift. But take heart…the fossils I saw on my field trip as a Geology student, imbedded in the surface layers of this rock, can’t be the only ones here. Some future storm will peel away more rock layers and in all probability expose other trilobites for lucky coast watchers to see! 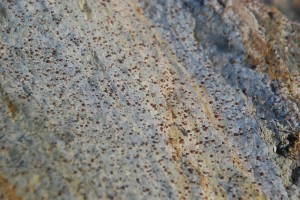 Along this section don’t be fooled by the fool’s gold. Cubes of pyrite crystals, which formed during North America’s collision with Africa, have now oxidized, forming little rust colored, bb sized pellets on the surface of one of the grey rock types. They look very much like the garnets that are found elsewhere on the bay islands, but these are iron pyrite, not the semi-precious garnet. 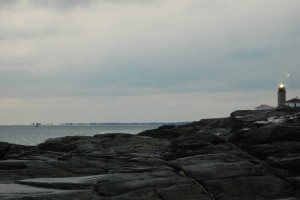 This hike ends at the very tip of the island, south of the lighthouse and down on the rocks in front of the fog horn. DO NOT GO DOWN THERE ON A FOGGY DAY! As the warning sign near the horn says, “Sound pressure levels in front of horn are dangerous.” But if it’s not a foggy day, and you carefully make your way out to the water’s edge at the point, you can turn around and see a gigantic and unmistakable fold in the rock layers as you face the lighthouse. This fold is a famous geologist’s puzzle, evidencing several occasions of folding and refolding, faulting and metamorphosis. It is easy to make out the layering in the rocks, and the curling shape of the center of the fold. And remember, all of these layers were once flat on the sea floor, half a world away. 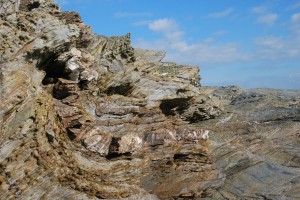 As I was taking in this last scene a bright patch of sunlight drifted over it all, putting a grin on my face and a thought in my head. We live in an interesting little corner of a pretty cool planet.