It’s true, it’s true…you CAN get there from here!

The “there’s” you can get to are some of the most beautiful places on the incredible coastline of Rhode Island. The reason you can get there is because the Rhode Island constitution guarantees you the right to do so.

Did you know that any citizen can pass freely along the shoreline, at any location where salt water meets the land and tides are felt, and exercise his/her rights to the shore? Those constitutional rights include: passing along the shore, fishing from the shore, gathering seaweed (it’s great fertilizer!), and entering and leaving the water (swimming). It doesn’t have to be low tide, and it doesn’t have to be only along an open, sloping beach. Whether it’s high or low tide, whether it’s at a beach or along a seawall, citizens can use approximately the first reasonably safe ten feet from the waterline (the width of an ox cart!) for their activities. 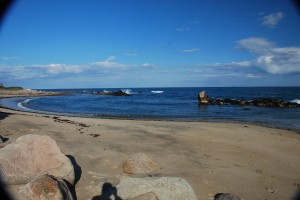 So let’s go. The first of my/our walks to the secret shores of RI is along a section of the south shore in Charlestown. This outing, as will the others to follow in this series, starts and ends at locations where there is public access to the shore. In this case I started at the Charlestown Town Beach called Blue Shutters, which anyone can enter on foot, with a small fee for parking a car. It will end at the DEM parking and access point at Quonochontaug Breachway, where parking and access are free. Of course you can make the trek in the opposite direction too. If you want a longer adventure, and appreciate the views from both perspectives, you can walk over to the breachway and walk back to your starting point. One-way distance is approximately 2.8 Km / 1.7 miles.

When you enter the beach, [pix] turn to the west (a right) and go down to the water’s edge. This is a beautiful, open sandy beach, and it actually stretches for some miles behind you to the east along the DEM East Beach parklands. At the edge of the town property you will see signs announcing that you are at the limit of town land and that it is private property beyond [pix]. While that is true, it has nothing to do with our right to go past those signs for our walk. As a mater of fact, the Coastal Resource Management Council (CRMC) has told me any sign that attempts to dissuade citizens from passing along the shore is illegal, and their enforcement branch can be called on to have it amended or removed. 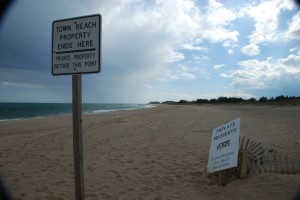 Just walk on by…

Now it’s time to explore! Keep your eyes and ears open, and keep on truckin’ along the water’s edge, heading towards the setting sun. (Which by the way, sets well out over the sea in the winter for a spectacular California or Key West ocean horizon ending to the day! [pix]) 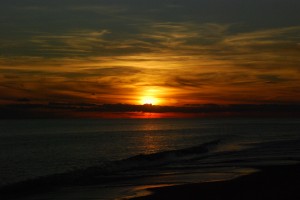 winter sunset from the south shore of RI

On this day I was treated to a secret shore surprise. Only on a lonely stretch of sand can one share the view with a pair of deer, whose hoof prints evidenced their traverse along the waters edge for quite a distance [pix] 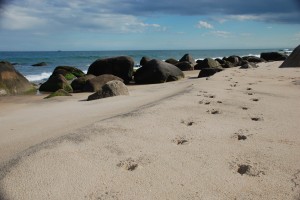 deer prints along the shore

Because the ocean shore environment is such a changing, transitory landscape, you never know exactly what the most recent storm has left at the surface for your discovery. That’s part of the fun of beach walking…you can take the same walk many times over, and keep finding new experiences to tickle your appreciation each time you go. Sometimes it’s a glimpse of the past.

Uncovered along the beach this day I came across the ruins of oceanfront buildings now no more than a field of debris. The wooden parts of the buildings are long gone, but the cement foundations and a nearby chimney [2pix] serve as reminders that the ocean is currently, and has been for the last 10,000 years, rising up across the land. Our beach at the height of the glacial advance was tens of miles to the south of Block Island, and the beach system has been rolling over itself and inexorably climbing up the landscape since then. The melting of the great glacial sheet covering North America added about 400 feet to the level of the world’s oceans. At our particular time in history, post glacial sea level rise is being exacerbated by anthropomorphic greenhouse warming and its attendant additional raising of the ocean’s surface. At quite a few spots, active erosion is going on, and the vertical scarps show the deposition layers that accrued during the building times [pix] 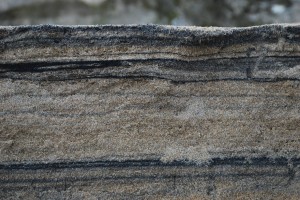 One consequence of this shifting of the shoreline up the land, is that the public easement territory above the high tide line is moving closer to the houses on the shorefront. On this walk, as you move along the strand, you will come to spots where a house is right on the edge of the sand. In the case of one house you will pass, if the tide is extremely high, you will have to walk up on the lawn to pass that section with dry feet (which is your right!) Another has a fence that, in very high water conditions, can be walked around if needed, using the property which erected it [pix] . Remember, one of the overarching concepts of our rights is that no person can erect a structure or alter the shore to diminish other citizens’ privileges of the shore.

It is also important to remember that with citizens’ rights come citizens’ responsibilities. When we are crossing the shorefront properties we must be both respectful and lawful. It is our duty to follow all litter, leash, and other local ordinances that apply to the location. We have the right to use the shore, not to abuse it!

Very much to my surprise, and something for you to look out for, is on one stretch where you will see some gigantic outcrops of granite bedrock [pix]. Imbedded in these massive rock knobs are some great examples of mineral crystals showing their internal facets in large, easy to see geometric shapes.[pix] Until I had taken this walk, I didn’t think there was any bedrock showing above the loose sediments between Narragansett and Westerly. Part of the walk is a scramble over some of these features. 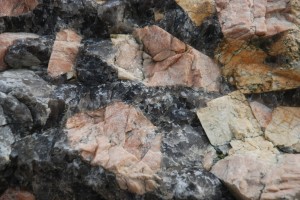 Stretches of boulder fields, more open sections of sand, and a curious little cove or impoundment [pix] behind a string of rocks, lie further down the line. On a calm day, this pool, as well as many of the rocky sections, would hold great potential for the snorkel minded.

Finally, you will arrive at the Quonnie Breachway. The gigantic tree skeleton lying along the mouth of the breachway opening for my viewing [pix] will someday seemingly disappear, to be moved to a new location, maybe reburied under the sand, by a future storm’s fury.

Standing on the inlet’s edge you are, of course, looking across at terra inaccessible; at least without jumping in and making the swim across the opening (which is a perfectly legal and available option!) No…for most adventurers the inviting beach rolling away into the distance will have to be the goal of another expedition, another time.

As you turn right and walk along the rocks lining the breachway, you will come to the houses built along its edge. On my walk I was impressed with the walkway which was constructed along the water’s edge in front of most of the houses [pix] . It struck me as a reasonable accommodation to us citizens whose tax dollars, after all, both constructed and maintain the rock wall which is the reason they are waterfront property owners in the first place.

As I got to the end of the houses lining the waterway, with the DEM parking area only a dozen yards ahead, I did encounter an unreasonable situation. The very last property owner had put up a blockade across the walkway for pedestrian traffic. Made of fence sections of various descriptions, it made a very effective barrier [pix]. Of course here, as could happen with the fence out on the open ocean shore, I did and your might, have to walk away from the water, across the property which holds the impediment to passage, in order to get around it and continue along the shore. Don’t fret…you’re well within your rights. If someone challenges you, I would advise being polite but resolute. Explain if you care to, but you don’t have to; you have the right to be there. 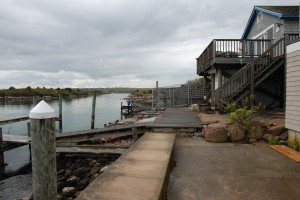 this is a DEM tragedy…we built the breachway, with a walkway, now it is blocked off and DEM will not get involved!

If you are made to feel at all uncomfortable, by all means call the police. The constitution specifically addresses this point; it states that the protection of our shore freedoms “…shall be an exercise of the police powers of the state…”

Hopefully, you won’t have to deal with this situation. I have, on 27 June 08, petitioned the CRMC to have this blockade removed, ASAP. I was e-mailed back 30 June 08 that the enforcement division of the CRMC has been given the case, and that I will be notified of the advancement of the effort. I will, of course, keep you all current on the proceedings in future installments.

Well, now you’re done. You have seen one of the secret stretches of RI shoreline that has been, let’s say, “under enjoyed.” Hopefully you can find the time to share the experience with others, perhaps make the trip in other seasons, when the shore will show you a whole different personality.