Truth be told, I didn’t really know where I was going. On this sunny and unusually warm November day, I had in mind to walk some of the coast of Jamestown Island that I had not yet seen. I was faced with the Rhode Islander’s challenge of finding an access point to the water, from which I could exercise my constitutional right to pass along the shore for my adventure.

I had a printout of a page from Google Maps that showed the roads of the island superimposed on the satellite image. A too little known fact is that any public road, which ends at the coast is a de facto public access point to the sea. I didn’t know much about the north end of the island, so I cruised up the east shore (on East Shore Drive) and checked out any road that seemed to head towards the water. Many were streets that ended short of the water, with house lots between the end of the street and the bay. But some did in fact extend to the water. I turned east on Broad St., near the northern end of the island, and found an actual public access with a limited number of parking spaces painted on the road and trash barrels to keep the location tidy. I was good to go. 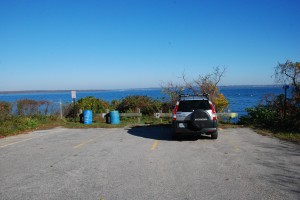 Because access is scarce along the northern end of the island, this turned out to be both the start and finish of this walk, with a return to Broad St. necessary for leaving the shore. The round trip distance I covered was about 2.5 miles.

The beginning of the walk covered a pleasant shore with a fairly wide beach made up of black sand and tens of thousands of limpet shells. At some places these shells are the predominant material from which the beach is constructed, complete with parallel terraces cut by the waves during various tide and storm situations. These shells are also called “slipper shells” or “boat shells” because they look, when viewed from the hollow side, like little boats with a tiny deck in the stern for the helmsman. 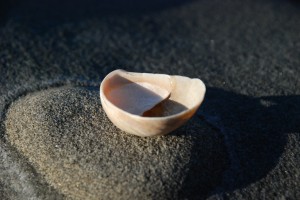 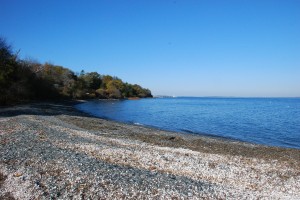 limpet beach- with all the features of a sandy beach

For about one quarter of a mile I strolled along with my footprints and those of a solitary deer the only signs of passage to be seen. 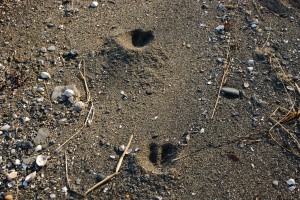 deer tracks along the shore

The docks for the shorefront homes here have long, permanent walkways built out into the water in order to reach water deep enough and rock free to approach safely. The shore walker has to duck under these structures to continue, and that is repeated a handful of times before the north point is reached. I was out during an ebbing tide, just falling from high tide, and I had plenty of room to get under the docks. If it were at the time of the monthly high moon tides (at full and new moon, when the high tide is higher and the low tide is lower than average) I might have had to climb up and over the decking to proceed…which we citizens have the right to do. Our constitution guarantees the right to “pass along the shore,” and one citizen can’t deprive other citizens of their rights because he/she chooses to build a structure (dock or other) for his/her individual benefit. 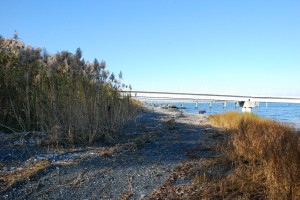 Past the docks the coast trends more to the west, and this north tip of the island is anchored by dark grey to black bedrock, very much different form the crystalline granite of Narragansett. It shows layering in many places, and is soft and crumbly in spots. In some stretches, boulders make up much of the shore material, and one has to be careful making one’s way. Right at the water line, as in other rocky shore locations, a dark algae covers the rocks and is treacherous when wet. The algae makes a gel to hold water when the tide is out, and traction on a jelly substrate is practically nil, so some care is in order. Because the rocks are themselves dark colored here, it is a little extra challenge.

As you approach the northern most point itself the landscape rises above the shore to create a bluff about eight to ten feet high. There is plenty of room to pass below the bluff on the natural shelf created by wave action acting on the shore materials. Coast walkers run into a problem only when they come to the North Lighthouse itself, now a lovely home. This house sits right on the edge of the water, and the whole property has been armored with a mass of large boulders piled along the water’s edge, blocking the part of the beach where we shore walkers would normally make our way. I was able to make my way over the rocks to the natural shore beyond, which then posed no problem to passage. There is, however, more to consider in this situation. Rhode Island guarantees our shore rights and privileges to all citizens, not just to the rock climbers among us.

The beautiful waterfront house is protected by the rocks piled in front of it…and that is a good thing. But by building that defense, which is very much to the gain of the owner, I believe the property has been encumbered with the responsibility for making it possible for the public to pass along the shore using that property to accomplish that passage. In this case, as would be true for similar situations, it would be fairly easy to do. The property owner (of a lot on which the house was very close to the water’s edge) could choose to allow the shore hikers to walk up the edge of their property on one side to the road just above, pass in front of the property on the road, then to give access along the far edge of the lot back to the water. The home retains its erosion protection, and the citizens have maintained the ability to pass along the shore with only a minor inconvenience.

I am presenting a concept for accommodating both the defense of the shorefront property from erosion and the legitimate, and long standing (since colonial times and then some) public rights of the other million citizens of the state. Details concerning freedom from liability for the property owner (as there are for other public easements), and making clear the responsibilities of the passing citizenry, can be worked out. Indeed, they have already been worked out by the other coastal states that have enacted modern “open beaches” laws.

There is also a benefit to the shore property owners with this accommodation. They would no longer be “prisoners of their property lines.” They too would enjoy the freedom to pass along the coast, and they have the most convenient access to it!

Beyond the lighthouse house, the shore is again passable in its natural state. The next property to the west has several small cottages built on the bluff’s edge, and one has a lower level patio right at the water line. 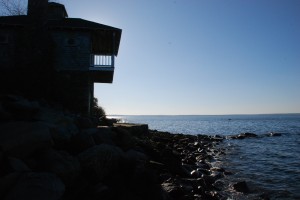 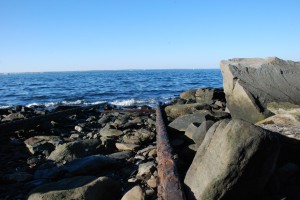 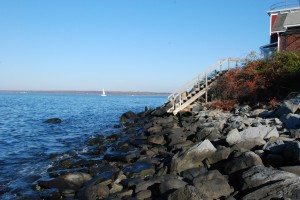 It probably had a rocky beach in front of it years ago, but now extreme high tide rises up and over the cement surface. Etched in the cement are the dates of constant repair, many of them, from 1940 up to 2005. 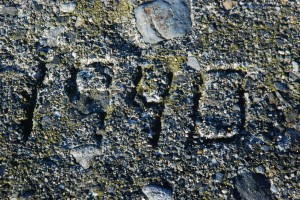 many re-builds of this property as sea level rose

Though the bay here is much less energetic than the waves of an open ocean shore, the coast still has to yield in order to dissipate whatever energy is sent against it. When predicted water level increases from global arming become reality over the next fifty to one hundred years, this coast and these buildings will undergo significant changes.

The view from the north end of Jamestown is a panorama of the heart of Rhode Island…Narragansett Bay. From North Kingstown in the west around to Middletown in the east the view is unobstructed. Quonset Point, Warwick Neck light, and the bay islands are laid out at your feet. 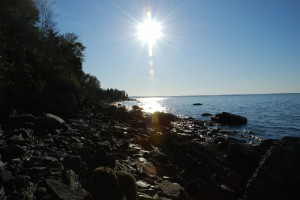 Now heading down the west side of the island, I had a low sun sparkling over the west passage and an undeveloped shore as far as I could see. The beach was fairly wide, with bedrock nubs interspersed with black sand and shells beaches. I encountered several places where the grey rock was dotted with small, orange garnets in great numbers. They are the real thing, a semi-precious stone, but not up to jewelry quality. In commercial quantities I believe these are ground up to be used as the coating on sandpaper, as the garnet is fairly hard. 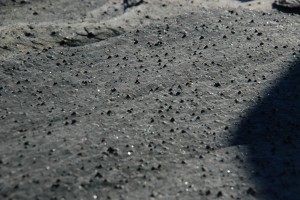 Garnets—a gem of a find

You will also see, partly buried in the sand, huge square cut timbers, and blocks of timbers bolted together, at several locations. A Jamestowner told me that these are the remains of “camels” from WWII. They were used as mooring buoys for the battleships which were part of the North Atlantic fleet then operating out of Newport. They found safe anchorage north of the submarine nets which closed off the bay from patrolling U-boats.

Each point of land I rounded opened up another beautiful stretch of natural shoreline to my view. Though having a grand time, I was getting a little anxious as I noticed the sun creeping ever closer to the horizon. I knew I had to backtrack to my starting point, but I suffered from explorer’s anxiety. I constantly wanted to make it to the next projecting headland to see if something especially interesting would be revealed from that further vantage.

When I reached the final viewing opportunity of the day, the next crescent of coast ended at a projecting point about a mile away, on which I thought there was a wrecked boat of substantial size…maybe an old fishing boat. Only on viewing my photo of that shore back at the house did I discover that it was an optical illusion caused by a large upward curved rock and a dilapidated viewing deck some distance behind it, with a camel timber appearing to make up the gunwale of the “ship” in between. In my field notes I logged the terminus of the walk to be in view of “Shipwreck Point,” which you may have noticed has been changed to “False Wreck Point.” 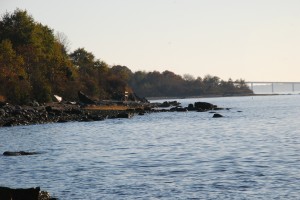 False Wreck Point— the turn back point for this day.

Alas, a closer inspection of the false wreck would have to wait. The shadows were stretched, the hour was late, the way home was long, and I had unwisely not brought my headlamp. I made my way back around the north end of the island, sometimes at the double time, and arrived at the Broad St. parking place in the fading twilight. The glow of the Naval War College and the lights of Aquidnick Island were glittering across the bay. It was a beautiful close to a rewarding afternoon.